A new Yahoo News/Marist Poll shows that American families are becoming more receptive to marijuana usage as marijuana legalization efforts have gathered steam across the country.

Again and again, the research shows that adults who have at least some experience with marijuana — whether they use it regularly or have simply tried it once — are much less likely to be concerned about its effects on themselves or others. This suggests that as weed becomes more widespread in the age of legalization, more Americans and their families will start to feel the same way.

Yet these changes are not without their challenges. 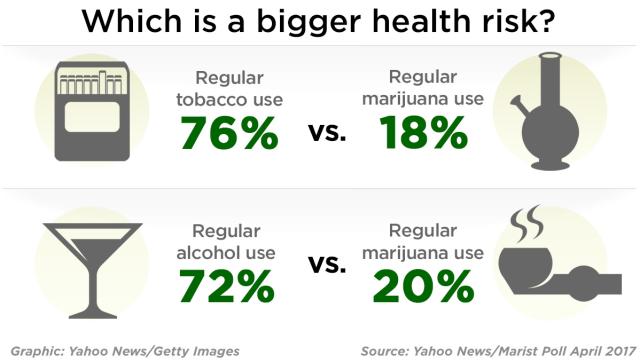 The first thing to know is that, according to the poll, most Americans who’ve tried marijuana at some point in their lives — a whopping 65 percent of them, in fact — now have children. The same goes for occasional users, who use pot at least once or twice a year (54 percent) and regular users, who use it at least once or twice a month (51 percent) — which means that as America transforms itself into a more marijuana-friendly society, families are set to take center stage.

We’ve all heard about the “mainstreaming of marijuana” in recent years, and it’s true that pot use has become more acceptable overall. (According to the poll, the nation as a whole is now divided — 49 percent in favor, 47 percent against — on the question of legalizing marijuana for recreational use). One of the more striking consequences of this mainstreaming is that it is altering our attitudes about children and pot.

At the very least, today’s families are discussing pot; 73 percent of parents say they’ve had the talk with their kids. But that represents a sharp break from earlier generations. Overall, 60 percent of Americans say their parents did not talk to them about marijuana, and the older the person, the less common those conversations were; 72 percent of baby boomers never had the talk with their parents, and among members of the Silent and Greatest generations (those over age 69), that number climbs to 95 percent. (Perhaps the more surprising statistic is that among this cohort, who grew up in the 1930s, when pot was a furtive indulgence of jazz musicians and assorted bohemians, as many as 5 percent did get a lecture about marijuana from their parents.) Likewise, 73 percent of the over-69 group say marijuana is a health risk, compared with 59 percent of baby boomers, 52 percent of Gen Xers — and only 35 percent of millennials.

So, how long before the United States goes the way of the Netherlands and completely legalizes the use of marijuana? Who knows, but one thing is certain from what has been happening across the country; Americans favor legalization. Whether the lobby for the corporations who don’t want legalization due to their own selfish reasons would allow this overwhelming will of the people to prevail is yet to be determined. After all, these corporate entities control our government.