Trump budget is a typical GOP budget; cuts for the poor, increases for the rich.

President Trump released his proposed budget for 2018 on Tuesday, and it holds no surprises for anybody who has followed budgeting under Republican administrations. You can sum every Republican budget up this way; cuts to programs that serve the poor, and increases to those that serve the rich, and this one didn’t disappoint. It contains $3.6 trillion cut in government spending over the next decade, and of course there’s no gain saying where the cuts are coming from.

In fact, it went a little further, and even found time and space to add a bit of mockery to the mix for the poor people it is trying to decimate.

Where does one start to enumerate the massive cuts to the programs that assist the poor?  From health care and food stamps to student loans and disability payments, this budget lays out an austere vision for reordering the nation’s priorities.

The document, titled “A New Foundation for American Greatness,”- such a grand name for a piece of crap – is supposed to be in line with Mr Trump’s “America first” message which he rode to power with. It’s certainly making your America great if you’re a rich corporation, or the War Industrial Complex, as it increases military spending by 10 percent, and calls for spending $2.6 billion for border security with $1.6 billion going to start building his wall on the Mexican border.

Over the next decade, this budget calls for slashing more than $800 billion from Medicaid, the federal health program for the poor, while slicing $192 billion from nutritional assistance and $272 billion over all from welfare programs. 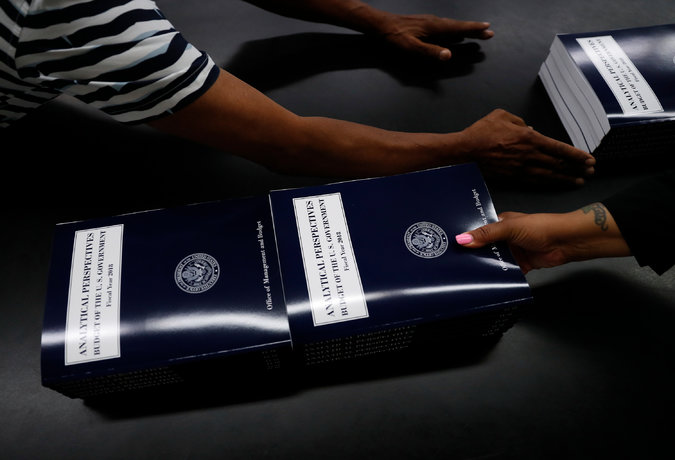 Domestic programs other than military and homeland security whose budgets are determined annually by Congress would also take a hit, their funding falling by $57 billion, or 10.6 percent. Disability benefits which support tens of millions of Americans will take a $72 billion hit, and  loan programs that subsidize college education for the poor and those who take jobs in government or nonprofit organizations will be eliminated.

“This is, I think, the first time in a long time that an administration has written a budget through the eyes of the people who are actually paying the taxes,” said Mick Mulvaney, Mr. Trump’s budget director.

“We’re not going to measure our success by how much money we spend, but by how many people we actually help,” said Mick Mulvaney, Mr. Trump’s budget director, while talking about the budget at the White House.

Mr Trump’s budget proposal also wants to “save” about $40 billion over the next decade by barring  undocumented immigrants from collecting the Child Tax Credit and adding additional measures to ensure they cannot collect the Earned Income Tax Credit.

And now to the bit of mockery in the proposed budget. Ostensibly at the behest of his daughter and special adviser, Ivanka, Mr Trump is requesting the sum of $19 billion over ten years for a new program to provide six weeks of paid leave to new parents. He either thinks maternity leave is more important to people than healthcare, food and nutrition, help paying back loans, and other welfare, or he is playing a cruel joke on Americans. You decide.

To cap it all, Mr Trump’s budget proposal was released while he was out of the country on his first foreign trip. The release of the budget proposal document is usually a very important event for a new president which he uses to promote his vision for the country. But, this time, the president decided to sneakily release it behind his back.

Maybe the president is trying to distance himself from this shameful document, or he is trying to dodge some of the backlash that will definitely come with its release, but he cannot escape it. His trip will end, at some point, and he’ll be back here in the country to answer questions about his budget proposal. It is yet to be debated in Congress so the backlash is still ahead and waiting for him.

The harshness and wickedness of this budget is not a surprise, though. That’s what Republicans do.